As part of his white collar and internal investigations practice, he represents both companies and corporate executives in antitrust, fraud, Foreign Corrupt Practices Act (FCPA), and public corruption contexts, as well as in sensitive matters such as theft of trade secrets or investigations with political implications. He also defends clients facing criminal charges or sentencing.

Adam has substantial experience leading both large and small investigations. He has conducted thorough and meticulous multi-jurisdiction investigations for some of the world’s largest health care, auto parts, reinsurance, banking, and technology companies. Adam skillfully and effectively identifies key evidence, and elicits corroboration from employees and other witnesses, while minimizing disruption to business operations.

Adam has compiled an extensive and impressive record in antitrust enforcement matters. He has defended clients and obtained favorable results – such as grants of leniency, decisions not to prosecute, or radically reduced settlements – in numerous criminal and regulatory investigations by global competition enforcement agencies such as the Department of Justice Antitrust Division, the European Commission’s Directorate-General for Competition, and Brazil’s Administrative Council for Economic Defense (CADE), among others.

Adam is often asked to lead or participate in co-counsel, joint-defense, or common-interest representations.  Corporate clients select Adam to serve as global coordinating counsel because of his creativity, leadership, even temperament, and ability to work well with firms of all sizes and from all cultures.  To that end, Adam has led or collaborated with teams of lawyers around the world, often simultaneously, from Brazil to South Korea, South Africa, Europe, and North America.  When serving as individual counsel alongside an employer’s outside counsel, Adam maintains a congenial and cooperative approach without sacrificing tenacity and zealous advocacy for his client, which has earned him consistent praise from the corporations that appoint him.

In his corporate disputes and commercial litigation practice, Adam has achieved positive outcomes in both federal and state court, as well as out-of-court settlements in significant high-stakes litigation of claims. These matters range from antitrust to real estate disputes, theft of trade secrets, civil rights, employment matters, breach of contract, breach of fiduciary duty, and other common law claims.

Strongly committed to public interest law, Adam develops and executes litigation strategies to hold the government accountable for decisions that adversely impact New Yorkers. He was one of the lead lawyers responsible for pursuing the landmark legal challenge to New York City schools that led to an overhaul of bullying protocols and the implementation of new protections for students.

Before joining WMH, Adam practiced law for more than seven years in the award-winning litigation department of a large global law firm. He previously served as chief of staff for a member of Congress and as a senior member of a New York City mayoral campaign.

Adam volunteers as a mentor for middle school students through a program run by the Nassau County Bar Association and serves on the board of several non-profit charitable organizations.

Conducted a worldwide investigation on behalf of a Fortune Global 500 auto parts company in connection with allegations of anti-competitive practices, including multiple investigations in Brazil, the U.S., and Europe.

Representing a U.S.-based former board member of a Brazil joint venture in connection with a public corruption investigation by Brazilian authorities.

Representing a Fortune Global 500 company in connection with investigations of anti-competitive practices by Brazil’s Administrative Council for Economic Defense (CADE).

Serving as global coordinating counsel to a Fortune Global 500 company in criminal and civil antitrust matters; coordinating the work of premier large firms around the world, from the U.S. to Germany, Brazil, South Africa, South Korea, China, Mexico, and Canada.

Represented a major trading company addressing allegations by an outgoing executive of employment discrimination and compliance failures; conducted an investigation, favorably settling the claims and recommended remediation of the alleged compliance issues.

Won a complete dismissal for a national solar energy developer, which had been sued to quiet title and for tortious interference with contract. The plaintiffs had sought $25 million in damages in their complaint. In dismissing the case, the court incorporated by reference the legal arguments Adam made in his written submissions.

Represented a physician in a federal lawsuit against a hospital employer for discrimination on the basis of race, age, and disability.

Served as special antitrust counsel for a Midwest anti-freeze manufacturer alongside an Am Law 10 firm conducting an internal investigation into other matters. 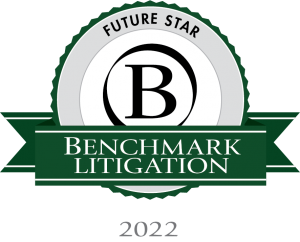 “Significant Amendments to Anti-SLAPP Statutes Could Have Sweeping Ramifications” by Adam P. Cohen and Derek Borchardt Published in The New York Law Journal